During this difficult time, taking a walk is one of our few options to escape the confines of our homes and get some fresh air. To take your daily walk to the next level, challenge yourself to Boston By Foot's Neighborhood Walk Architecture Scavenger Hunt! On one or more of your upcoming neighborhood walks, be on the hunt for these architectural features. But be sure to keep at least six feet of distance from others!

Many of these features are easy to spot on houses and large apartment buildings, especially those built in the late 19th and early 20th century. Others may require a walk by the local school, church, bank, or post office, again looking for buildings from the late 19th and early to mid-20th century. If you are lucky enough to live in an area with older, historic structures, be sure to take a stroll by those. Just the pleasure of looking at them will enrich your daily walk.

Let us know what neighborhood you're walking through, then upload your photos through this form. We can't wait to see your findings. 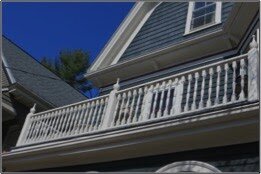 Balustrade – a railing consisting of a top rail, sometimes a bottom rail, and balusters. Balusters are short posts in a series that support the top rail. They can be any shape, from plain round or square to elaborate curved profiles. Balustrades are found along the edges of porches and balconies, along the cornices of larger houses and public buildings, and also higher on the roof surrounding widow’s walks or just for ornamentation. Upload your photo of a balustrade in your neighborhood. 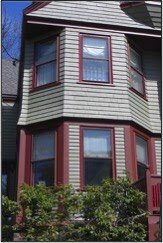 Bay window – An angular projection of a building front filled by windows. It can be only one story or multiple stories high. If the projection is curved with no corners, it is a bow window; if it is on upper floors only, and does not extend to the ground, it is called an oriel. Upload your photo of a bay window.

Bracketed cornice – a deep, overhanging cornice (the exterior trim of a building where the wall and the roof meet) supported by decorative brackets, which are supports that help to sustain the weight of the overhanging part. 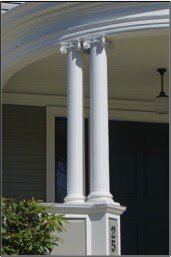 Column – A cylindrical vertical support. In classical design based on the Greek or Roman orders, columns consist of a capital, a shaft, and a base. Columns sometimes stand on their own supporting nothing when they act as monuments. Classical columns are often found on banks, religious buildings, or other public structures. On private houses of the 19th and 20th century, columns are most often found supporting the roofs of porches, verandas, and entrance porticos. These can follow the classical Greek and Roman orders, or they might have capitals of a completely different design and/or be square in shape. 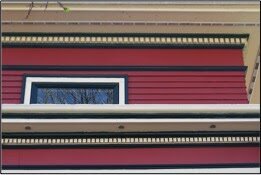 Dentils or dentil molding – A molding is a long, narrow, ornamental surface used to finish edges, such as the edge of a door or window trim, the top of a wall, the underside of a cornice, etc. A dentil molding consists of a series of very closely spaced, small, unadorned rectangular blocks. They resemble teeth, and the word derives from the Latin dent, for tooth. 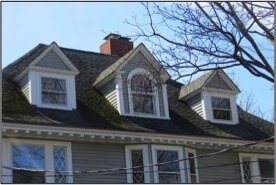 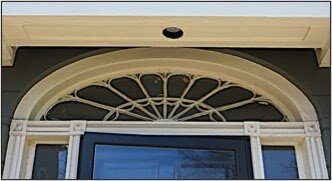 Fanlight – A semicircular or semielliptical window over a door. They commonly have decorative radiating bars or ornamental work inside them that suggest an open fan. 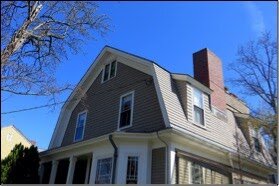 Gambrel roof – A roof having two slopes on each of two sides of the building on either side of the central ridge. The upper slope is shallower and the lower slope is much steeper. 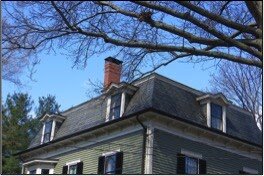 Mansard roof – A roof having two slopes on all four sides of the building. Like a gambrel roof, the upper part of the roof has a slope that is usually much shallower than that of the lower part of the roof. The two roof types differ in that the gambrel roof only slopes over two sides of the building. From the ground, the upper slope of a mansard roof can sometimes be so shallow, that it is difficult to see, or sometimes it is quite peaked. The lower slope of a mansard roof can be straight, convex (curving or flaring outward at the bottom), or concave (curving or bulging inwards on the lower slope). 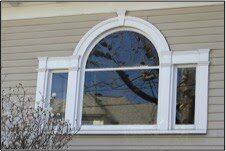 Palladian window – A large window divided into three parts: a taller central window that is arched at the top with a smaller rectangular window on each side of it. All three parts must be present for the window to be considered a Palladian window. The name comes from the 15th century Italian architect Andrea Palladio, who used it as a prominent feature in many of his works. 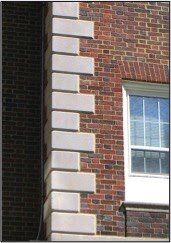 Quoins – Flat stones at the corner of a building that are distinguished decoratively from the building’s other materials by color, size, and texture. They are usually laid so that their faces are alternately large and small. Quoins also sometimes can be found in wood on wood frame houses.