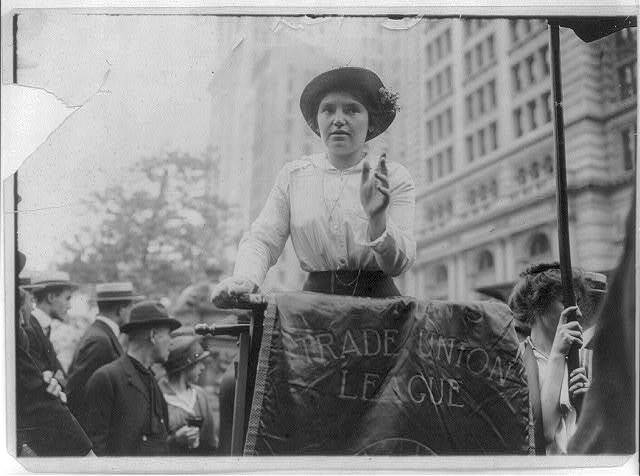 A Woman Booster for the Trade Union League

As working women were fighting for rights in the workplace, suffragists were demanding the right to vote. Boston’s women’s trade unionism & suffrage movements were led by proud, defiant women who were divided along class lines. By the end of the 19th century, suffragists were becoming sensitive to the growing number of immigrants (non-native born factory workers). They decided to appeal to the legislature to limit the franchise to native born women.

For most of the 19th century, Boston’s working women’s (non-native born) voices were not being heard. Unions had remained male dominated. It would take the creation of the WTUL (Women’s Trade Union League) founded by Mary Kenney O’Sullivan in Boston (1903) to show women how to organize themselves into trade unions. Women’s voices grew from the foundation laid by the Denison House and the WEIU (Women’s Education & Industrial Union). It wouldn’t be until the early 20th century that suffragists & non-native working women would realize that to achieve their goals they would need to unite.

Meet your guide at Brewer Fountain in Boston Common, along Tremont Street.

Finding Your Guide: All guides carry an 8×11 sign that says “Boston By Foot Walking Tours.”