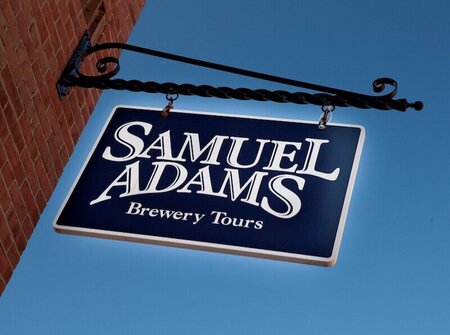 Samuel Adams: Founding Father, politician, leader of the American Revolution, and the namesake of the #1 brewery in the U.S. It’s no wonder we chose his statue as the meeting location for several of our most popular tours!

Besides pioneering the craft beer industry and brewing some of the best beer in the country, Samuel Adams has been a valuable member of the Boston By Foot community since 2012. As a partner, their support goes above and beyond in helping us spread our love and passion of Boston to everyone.

Along with generous support, Samuel Adams also works with us in other meaningful ways. From regularly providing their delicious local brews like Boston Lager and Summer Ale to our many member, docent, and community events, to hosting our 40th Anniversary Celebration at the Samuel Adams Brewery right here in Boston, the support from the Sam Adams team never ceases to amaze us.

We’re extremely proud of our partnership with such a great organization, and so thankful for their continued support!