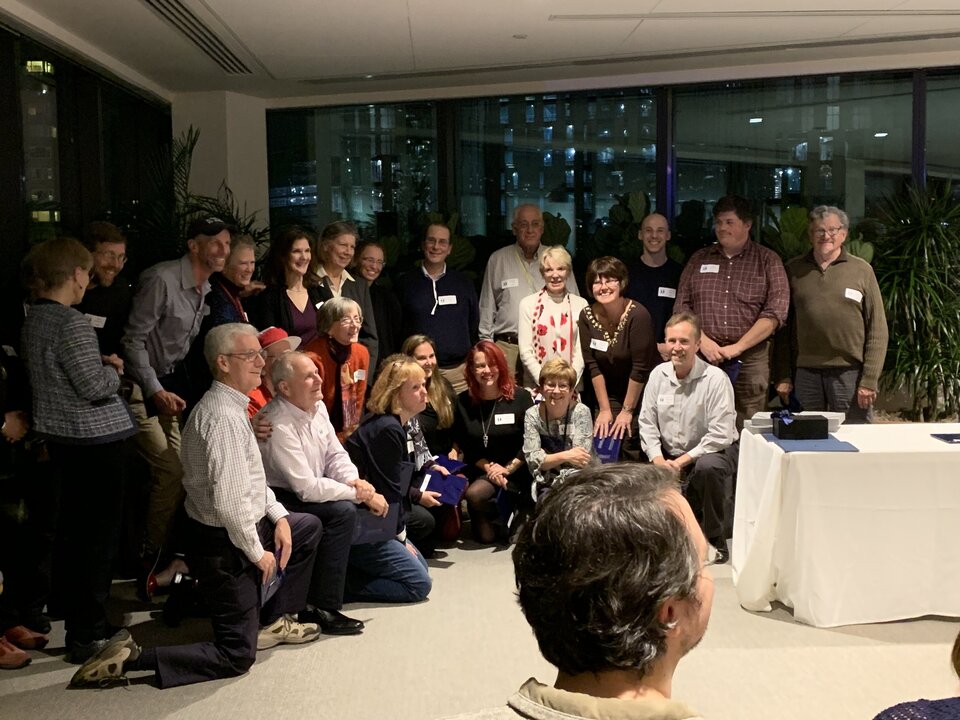 Just a few short weeks ago, dozens of Boston By Foot volunteers made their way to Education First’s gorgeous headquarters for our annual Awards Reception. During this evening of joy and festivities, we celebrated many well-deserving Boston By Foot volunteers, including those who gave twenty or more tours this season, retiring committee co-chairs, Flansburgh Travel Fellowship winners, distinguished friends, and a handful of guides who have served BBF for five, ten, fifteen, twenty-five, thirty, and even forty years!

The following Docents were acknowledged for giving 20 or more tours:

The Boston Women's Heritage Trail was presented with the 2018 Distinguished Friend Award as a long-time friend of Boston By Foot, and a long time contributor to the greater understanding of Boston history. BBF was honored and delighted earlier this year when the Boston Women’s Heritage Trail invited us to lead their tours on their behalf, starting with the Notable Women of Beacon Hill walking tour.

The distinguished service award was presented to Gretchen Grozier, a dedicated guide who has played many roles in our organization in her 20 years as a Boston By Foot docent – Committee Co-Chair, Group Leader, Demo Guide, and Editorial Board Member. This year she played a huge role in developing two of BBF’s newest partnerships. BBF presented programming this year with the Boston Women’s Heritage Trail and with the City of Boston for the Imagine Boston 2030 initiative. Gretchen helped develop relationships with both organizations, adapted the Notable Women of Beacon Hill tour so we could present it with the Boston Women’s Heritage Trail, and wrote a whole new tour of Upham’s Corner to present in partnership with the City and their Upham’s Corner partners.

In 2017, Boston By Foot established the Docent Emeritus position to honor the contributions of longtime volunteers and enable them to continue a lifetime connection to the organization after they have decided to end their active involvement.

After 10 or more years of service, Docents may choose to become Docent Emeriti. They will receive lifetime Volunteer Membership benefits and the lasting title of Boston By Foot Docent Emeritus or Docent Emerita.

This year we added the following volunteers to the ranks of our Docent Emeriti.

We sincerely thank all of our newly inducted Docent Emeriti for their many years of service to Boston By Foot, and treasure our ongoing relationship. We also thank not just the award recipients listed above, but also every one of our wonderful volunteers. Their passion and love for Boston By Foot is beyond compare, and we’re so thankful to have such a strong and devoted community.