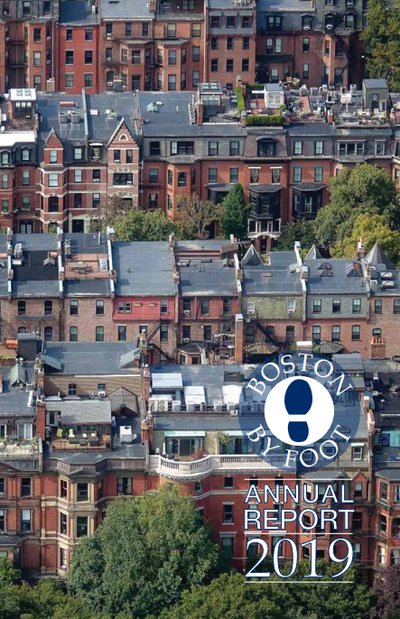 Boston By Foot recently published its 2019 Annual Report, reflecting upon its accomplishments in its 43rd year.

In anticipation of the 100th anniversary of women’s suffrage, Boston By Foot declared 2019 “The Year of the Woman.” We expanded our partnership with the Boston Women’s Heritage Trail and offered tours on women in several neighborhoods including a new tour, the Remarkable Women of Jamaica Plain. Our Louisa May Alcott’s Boston tour was featured in celebration of the release of the new Little Women film, and the role of Boston women in the labor movement was recognized in Boston Women Finding Their Voice. Guides were encouraged to feature stories of women on all their tours, from Anne Hutchinson of the 1630s to Boston’s contemporary leaders.

The 2019 Annual Report is now available on our website, and we invite everyone to take a look at all that Boston By Foot achieved in 2019.