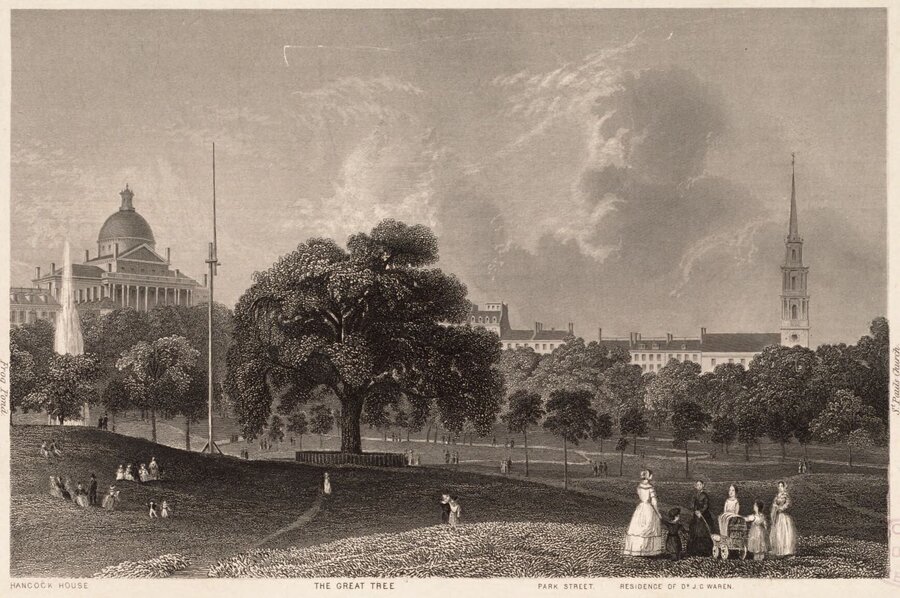 Urban green spaces, as a free public amenity accessible to everyone, serve to promote inclusion and strengthen our sense of community. In these spaces, all are welcome to play, reflect, exercise or rest, greet and mingle with fellow humans, and connect with the natural world.

In our Green Spaces Tour Series this fall, we celebrate three signature Boston parks, the Boston Common and Public Garden, the Charles River Esplanade, and the Rose Fitzgerald Kennedy Greenway. Developed over the course of four centuries, each of these unique spaces bring residents and visitors together and contribute immeasurably to our health and quality of life.

Boston Common is the oldest public green space in any American city. From its humble beginning in 1634 as a public pasture and its dark chapter as the site for public hangings, the Common gradually took on the functions of a park. In the early 19th century, under the direction of Charles Bulfinch, the Common acquired trees and gravel walkways, Charles Street was extended along the Common’s west side, and Boylston Street was built to replace the marshy Frog Lane. Cows were ultimately banned in 1830, not without controversy, by Mayor Harrison Gray Otis.

The Common’s location opposite the State House makes it a natural site for exercising our freedoms of speech and assembly. In 1893, Julia Ward Howe organized a demonstration by 1,500 women to protest the laying of aboveground trolley tracks in the Common, an action that contributed to creating an underground subway system. In 1965, Dr. Martin Luther King Jr. led a “Mile of Marchers” from Roxbury to the Common where he delivered a speech opposing school segregation and declared, “Now is the time to make real the promise of democracy.” And two years ago, in the wake of the Marjorie Stoneman Douglas school shooting, tens of thousands of protesters rallied on the Common in support of stricter gun laws.

The Public Garden, Boston Common’s neighbor to the west, sits on filled land and replaced noxious, flammable ropewalks that previously occupied mudflats on the edge of Back Bay. The Public Garden was established in the mid-1800s as the first botanical garden in the U.S. and showcases a variety of trees and seasonal flowers around a central lagoon. Formal plantings provide a lush backdrop for elegant fountains and statues, and pedal-powered swan boats lazily circle the lagoon during spring and summer, harking back to a slower era. This year, the pandemic has kept the swan boats in storage until further notice, and their absence reminds us to be patient during this challenging time. 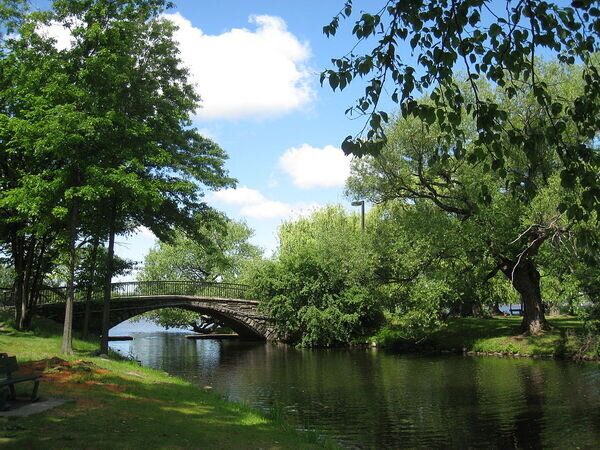 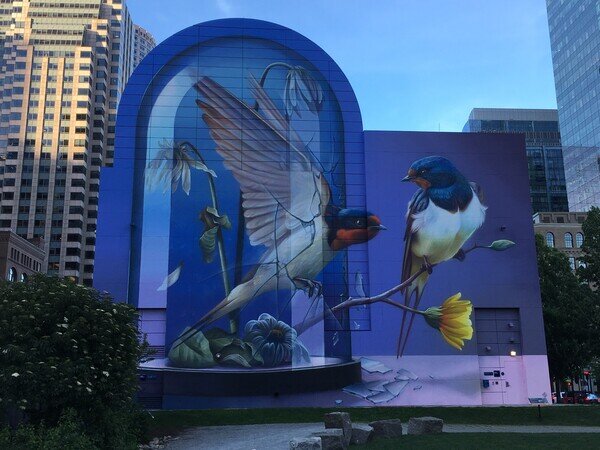 The Charles River Esplanade, which likewise followed the filling in of Back Bay, is the vision of landscape architect Charles Eliot, Jr., an apprentice and later partner of Frederick Law Olmsted. In 1893 he proposed the Charles River Reservation, a 20-mile public recreation area along the river’s banks, surrounded by parks and parkways. The lower half of the reservation, from the Charles River Dam to the Watertown Dam, is the Charles River Basin, which includes the Esplanade on the Boston side.

Eliot strongly argued that a democratic society needed democratic spaces, and we see that ideal reflected in the Esplanade’s playgrounds and ball fields, community boating opportunities, bicycle paths, and public concerts and movies. In particular, the sport of rowing drove this idea forward. Organized rowing, which began on the Charles in 1844 with a group of Harvard students, attracted competitors and spectators from all walks of life and fostered the principle that the river could be an open recreational playground for all. When Charles Eliot tragically died in 1897 at the age of 37, James J. Storrow II, an influential rower and Harvard graduate, along with his wife Helen, carried the torch to fulfill Eliot’s vision.

Boston’s newest green space, the Rose Fitzgerald Kennedy Greenway, replaced the Central Artery, a 6-lane elevated highway through downtown. Built in the 1950s, Boston’s “other Green Monster” overtook a 30-acre corridor of land, displaced thousands of businesses and residents, and cut off the city’s North End and waterfront. Forty years later, the Big Dig moved the highway underground, creating the rare opportunity to recover this land and transform it into a new civic space for all to enjoy.

Not surprisingly there were multiple opinions about what to do with this land! Neighborhood residents from the North End to Chinatown, as important (and longsuffering) stakeholders, were an important voice in influencing the design of individual sections of the park. Today the 1.5-mile Greenway annually attracts over a million residents and visitors to gather, play, stroll its gardens and experience ever-changing contemporary art exhibits.

All these premier green spaces have been hard won. In the case of the Greenway, which opened in 2008, we’ve seen the extensive public planning process and sometimes intense political wrangling and battles for alternate uses for this valuable property play out in real time. In their day, the process to design and develop the Public Garden and Esplanade involved similar conflicts among competing priorities and interests.

Also, while all these spaces are publicly owned and maintained, they rely significantly on philanthropic contributions and volunteer support to operate at the standards we enjoy and may take for granted. The Friends of the Public Garden, the Esplanade Association, and the Rose Fitzgerald Kennedy Greenway Conservancy, in cooperation with governmental entities, engage a host of private and corporate donors to make capital improvements, undertake restoration projects, organize programming and sponsor new art installations. They likewise recruit and manage volunteers who serve as park guides and stewards, deepening community involvement and ensuring the continued vibrancy of these spaces for the benefit of all.

Join us this fall to walk and experience these important civic spaces, learn about the people who contributed to shaping them, and delight in their gardens, fountains and art!