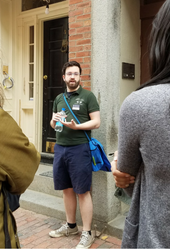 Billy Lewand is a New York native who is starting his third season with Boston By Foot this Spring. After taking several walking tours abroad, Billy decided to put his teaching background to use and become a tour guide in his own city. Thanks to his time with Boston By Foot, Billy has become a certifiable architecture fiend who will frequently try to guess the construction dates of 19th century homes based on their fenestration.

What tour do you give for Boston By Foot?

My favorite tour is my regular tour, the Hub of Literary America. My background is in English literature, so it was a pretty easy choice for me when I joined Boston by Foot. We tend to get a lot of teachers on the tour, which is fun, because I love hearing about how the history of Hawthorne, Alcott, Emerson, et al. is taught in classrooms, and I also love hearing when they tell me that they're going to pass along to their students something I've told themon the tour. I think it's also amazing that many of the books I mention on the tour are still read, loved, shared, and taught. I like it also because it's a bit different from the other tours, many of which focus more on architecture. The Hub of Literary America tour is ultimately about people, and how their lives in Boston shaped not just how they though and what they wrote about, but the entire course of American literature.

What's your favorite building in Boston?

Does it count if my favorite building in Boston doesn't exist anymore? I have a weird fascination with the old Province House, which was the seat of the royal governors of Massachusetts. The fascination began when I read Hawthorne's Legends of the Province House, which starts: "One afternoon, last summer, while walking along Washington Street, my eye was attracted by a signboard protruding over a narrow archway, nearly opposite the Old South Church." When I moved to Boston, you can bet your bottom dollar one of the first things I did was try to find the site of the Province House. The only thing remaining are the back steps, but I think it's a great example of how in many ways Boston is a palimpsest; all this new construction is built on the traces of the past. It's also impressive in its own right: the Province House stood for nearly 250 years, and went from being a merchant's house to the seat of government, to an inn, to a theater.

What is something tour groups are always surprised to learn?

The density of characters and stories across so many time periods is something I hear a lot about on my tours. There are spots where I could easily talk about 10 different people without moving (though that wouldn't make for much of a walking tour!). The extent to which major literary personages of the 19th century intersected is extraordinary. Case in point: When Nathaniel Hawthorne married Sophia Peabody, they moved into a house rented from Ralph Waldo Emerson's family, the garden of which was planted by Henry David Thoreau as a wedding gift. It's a real joy to share stories like these.

What is your favorite tour memory?

Every tour has something special, but in preparation for my very first tour, I memorized The Cross of Snow, by Henry Wadsworth Longfellow. Longfellow is the last stop on the Hub of Literary America tour (which is the tour I give the most), and the poem is him reminiscing on the loss of his wife Fanny 18 years earlier. At the end of the tour, in front of the home where Longfellow married Fanny, I recited the poem, and after I finished, it occurred to me that it's a special experience to share in these historical lives in this particular way. As a guide it's my goal to bridge the gap that history sometimes creates.