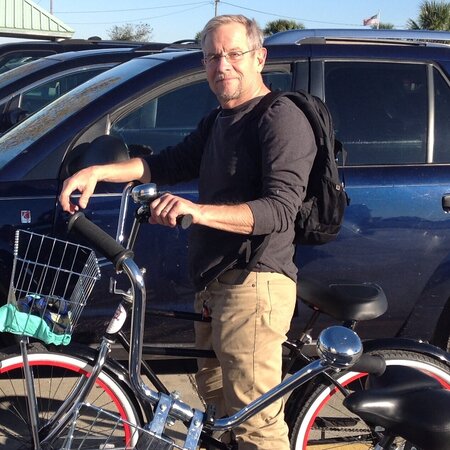 Something that truly sets Boston By Foot apart from other organizations is the diversity of interests and professions of our volunteers. We have historians, teachers, scientists, artists, and everything in between giving our tours. With over 200 volunteers, we’re always discovering something new about them! For instance, did you know that one of our guides helped design the Boeing 747? Longtime Bostonian Bob Malsberger has been living in the city for more than 45 years, yet he just joined the BBF community in 2016. How did he go from designing the iconic “Jumbo Jet” to leading Boston By Foot’s Road to Revolution tour? Read more below to find out!

I’ve lived in Boston since 1970, initially on Beacon Hill, and now in Jamaica Plain, and have always been fascinated by what an interesting and unique city it is. When my wife Norma and I visit other cities, we always take a tour, and think it’s the best way to become familiar with and understand that city. But, despite living here so long, and having that attitude, I never took a tour of Boston!

A few years ago we took the Architectural Boat tour in Chicago, which for me became the gold standard for tours (I loved finding out that it was a Chicago tour that led to our founding). Once I retired I started looking for a volunteer opportunity, and saw the listing for Boston By Foot, which seemed wonderful: I’d learn about the history and environment of Boston while preparing to give tours to others, and, in the process, give me my first Boston tour.

While I enjoy reading history, particularly about the Revolutionary War and the early growth of our country, I went to college in Engineering and then actually became one. In college I did once think about switching to an architecture curriculum, but that doesn’t really count. Initially I was an aerospace Engineer with Boeing in Seattle, and did some design work on the 747 in its early development. I spent the last 20 years of my working career as a Biotech Engineer with the Massachusetts Biologic Laboratories, the only public biotech facility in the country, which is now part of UMass Medical School.

My favorite tour is the Road to Revolution. I love the scope of the tour, its length (I think 2 hours is needed to really do a tour justice), all the neighborhoods we walk through, the grand tour of wonderful buildings, and how interesting and amazing this period of time is. As I tell my ‘tourees’ at the beginning, “it’s my favorite tour because it has a narrative and tells a story.”

There are so many, but one does stand out. On a cold and raining November day last year, I only had two tourees. They were two young lads from Tyler, Texas who had found a $100 round trip airfare to Boston, and were up for the adventure. And what they wanted to do most was to take a two hour historical tour of Boston! They were engaged throughout, asking many questions, and had one important goal in mind: to visit Paul Revere’s house. One of them had played Paul Revere in a play as a child, and was determined that one day he’d see where his hero lived. After the tour was over, and since they had seen the USS Constitution from Copp’s Hill, their next stop was to walk over to Charlestown. I just loved their attitude!

It’s hard not to choose the Boston Public Library, but, since it’s not on my tour, I’d like to point out two others that I rave about. The first is the Old State House, which I think is just magnificent in style and appeal (not to mention historical significance). After pointing out that it was built in 1713, and then after seeing Paul Revere’s post-medieval house built in 1680, I like to impress on folks that it only took us 33 years to gain that remarkable improvement in construction ability.

The second is the Winthrop building, the first steel framed building in Boston, which apparently was a sensation when constructed. Its wonderful curved terracotta exterior stands out for me, and it’s significant that it stands on the site of John Winthrop’s second house, where the original spring flowed.

Two things. One is that Boston was the engine that drove the Road to Revolution: it all happened here (yes, the Continental Congress was meeting in Philadelphia, but I like to think that they were reacting to us). And once the British left on Evacuation Day, the war shifted elsewhere. The second is that George Washington actually came to Boston in 1749 asking Governor Shirley to give him a post in the Royal Army. They’re delighted to know that he was turned down.

Chicago. It has its own very interesting history, quite distinct from Boston’s. The architecture is fabulous, and the city has done such an amazing job on developing the parks along Lake Michigan. And it has TWO major league baseball teams.