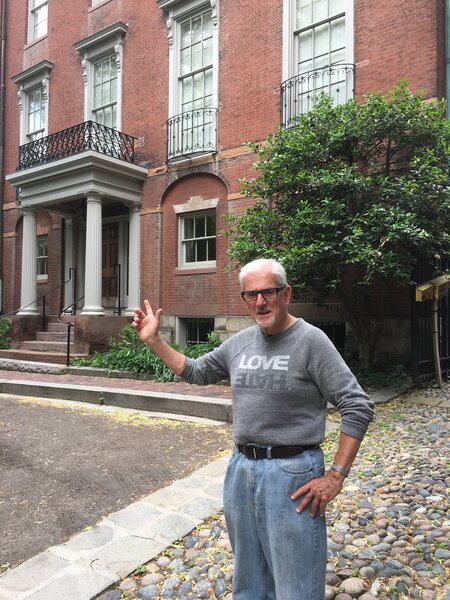 Steve Loher grew up in San Francisco, or more specifically, across the Bay in El Cerrito. He was attracted early (around five years of age) to the organ and it became his profession, along with choral conducting. He became a church musician because that is where organists and choirmasters can make money. In 1987, he moved to Boston to work full-time at the Christian Science Center, where he gives tours of The Mother Church.

Where are you from/ where do you live?

From San Francisco, but have lived in Boston for 30 years! I live in the East Fens on Gainsborough Street.

I only do Heart of the Freedom Trail.

I had been working for Pitcarin Tours and also guided at The Mother Church in Boston. I love showing our fabulous city to our visitors and was attracted to Boston by Foot because there is a desire to give accurate information to our tourees. I also had a friend who was a BBF docent.

Certainly more than one! I love it when tourees ask intelligent questions. One memory that stands out: I had a couple from South Carolina on the tour. When I was talking about Charles Bullfinch as the first American architect, they said that they thought it was Robert Merrill from South Carolina!

I have always been interested in history/architecture in cities where I have lived. When I moved to Boston in 1987, I began to "read up" - especially the Whitehill and Sans-Tucci books. My time with Pitcarin Tours enhanced my understanding of Boston.

I would do many of the BBF tours if I had the time. But I have settled on Heart of the Freedom Trail because of the history one can impart to our visitors. Almost every tourist takes the Freedom Trail in some form – either guided tours, with a guide book, or just walking the "red" line and dropping into various stops (much like practically every tourist in San Francisco makes it to Fisherman's Wharf). Also, the buildings we see on this tour are some of the most interesting and essential in Boston history.

This is like asking you to choose between your children. In Boston, we are privileged to have so many wonderful buildings. But if pressed I would chose The Extension of The Mother Church In Boston.

Many things, but one that comes immediately to mind is that about 60 percent of the City of Boston is "made land."

Probably London, but Paris and Rome keep bumping up.

I am proud to be a part of BBF. I believe accuracy is very important when we are giving tours to our visitors, especially since they are paying money. We are fortunate to have such a fine group of informed colleagues and it is quite gratifying to realize that we are all volunteers!

Steve gives tours of the Freedom Trail on Fridays throughout the summer and into the fall, beginning on June 21st.